Sustainability and the Public Record 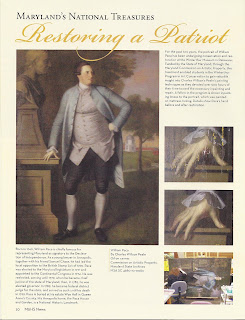 Friday, Jan 8 2010 — Source: The Baltimore Sun
This November, Marylanders will have a once-in-a-generation chance to shake up the political process. Yet few know about it, and even fewer are talking about it. Maryland’s Constitution stipulates that, every 20 years, the General Assembly must place on the general election ballot a binding referendum asking voters whether they want to convene a constitutional convention. If it passes, it could be the most politically momentous event in Maryland during 2010.


For the last Constitutional Convention in Maryland, see: Guide to the Records of the Constitutional Convention of 1968 and the records of the Convention
In April of 1788, William Paca (in the portrait above which is currently on loan to a joint Maryland Historical Society/Maryland State Archives exhibit) arrived with 22 proposed amendments at the convention in the Maryland State House called to ratify the Constitution of the United States. With former Governor Thomas Johnson's help, he convinced the convention that if they would just listen to his amendments and the arguments for them, he would sign the Constitution without amendments. Maryland ratified the Constitution without amendments on April 28, 1788.  The amendments Paca proposed and the minutes of his presenting them were immediately printed up and sent to the Virginia Ratifying Convention, where they were merged into the amendments proposed by George Mason. Ultimately, of course, what Paca and Mason proposed evolved into the first 10 amendments to the Constitution. In those days we cared about the written framework upon which our republic is based and we cared enough to ensure that the process of making it better was written into the fabric of the governmental institutions created to implement a government accountable to the citizenry. In 2010, Marylanders have an opportunity to say yes to revisiting and revising their state constitution.

The future of our democracy depends upon a well-informed, well-educated electorate willing to actively participate and dynamically improve the electoral and governmental process. In the context of civil debate and dynamic compromise, constitutions and laws, at the local, state, and federal level need to be constantly reviewed and thoughtfully changed based upon authoritative and accountable information.

In the public world, that central cortex of reliable information must come from a publicly accessible archives in partnership with a vibrant public library system, in all of which the cost of delivering that information is within reach, within the economic means, of every citizen of the republic.

For some months now, since my return from advising the Serbian government on the future of their electronic archives, I have been asked by my sponsor, the Jefferson Institute, to provide a one page summary of my views on the present and future sustainability of public archives.

The context for us, of course, is the downsizing of government personnel, an enormous public deficit and public debt, which has increasingly made it difficult to even provide custodial care for the treasures we have in hand, let alone the permanent records, both paper and electronic, that we ought to be incorporating (accessioning) into our collections.

It became clear to me several years ago that there would never be adequate direct funding for the Maryland State Archives. After much planning and careful shepherding of the capital resources allocated to us, we did get a new facility in 1986, a facility that we are proud to point out we brought in under budget, with next to no change orders, and effectively furnished it with compact mobile shelving of our design which not only was acquired under budget, but has been virtually maintenance free since we opened in the summer of 1986 and continues that way.

We ran out of space for permanent records in the year 2000, and since then have had to pay for substandard commercial warehousing to accommodate the annual growth in our permanent record collection. In addition, the State chose to charge us rent for the space we built in 1986. At the same time our operating budget in general funds has been systematically withdrawn to the point where we will have a deficit of $187,000 that will need to be made up from special fund income and a starting deficit for next year of over $1.5 million dollars which also must be made up from special fund income derived from the services we provide the public and state government.

In all, to be sustainable for the present and the future, as a vital information service and keeper of the State's public treasures, the Maryland State Archives has had to move to a business model of operation that requires us to earn approximately 80% of what it costs to keep the doors open and make the records and the information they contain accessible.

How do we do it and how can we continue to be successful at what we have been doing for the past fifteen years or so?

It requires considerable self discipline on the part of a core staff of a dedicated conservation, appraisal, reference, and research staff. Each aspect of our work could consume without difficulty all of the resources that we can muster, if we permitted it. The key to success is

We have developed the first fully functional electronic archives at the State level and have brought into it a fee based service that provides nearly 70% of our income flow. We have the legal framework in place that permits us to set aside 7% of anything we earn into a permanent endowment of which only the interest is meant to be used for educational out reach and explaining to potential users the value of the information the Archives contains.

In order to be sustainable now and in the future, however, the Maryland State Archives must find ways


1) to reduce the rent it has to pay for the storage of records by building adequate state owned and archives operated facilities,


2) enlist more stage agencies (including the Maryland General Assembly and the Office of the Governor) in our crusade to make permanent electronic information created by the State accessible through the archives,

3) allocate staff time to pursuit of significant grants, and
4) continue to balance the work we do as Archivists and Conservation specialists, so as not to be drawn back into solely a warehousing operation in which we provide little understanding of what now have and no programs for taking on what we ought to have.

That may in fact mean a reduction in hands on, in person reference services, and much more emphasis on developing self-service finding aids and placing records on line in a pay as you ask environment. The model there may well be the Google model, where you can find what you think you need revealed in snippets, but for the full document or the full page, you may be required to pay a price.
In addition to public funding, both special income and direct appropriation, we must have an active and engaged Friends group that taps every possible source of private funding for our interpretive and outreach programs.


In all, with regard to the Maryland State Archives which serves a State of nearly six million people, I believe our base line budget, adjusted for population growth, needs to be $10 million dollars in today's dollars, supplemented by income from an endowment of $10 million dollars at today's interest rates, with core staff funding from direct appropriation of $3.5 million, making the breakdown viz income of approximately 25-30% from direct appropriation, and 70-75% from service related special fund income. When we began our special fund income model in the year 2000 our budget was approximately $2 million, all in general fund appropriated dollars. Today the split is about 20/80, on an overall budget of ca. $7 million. We have a ways to go, but if we pay attention to the business model, are successful with the grant applications now in the works, and secure capital funding for a new storage, conservation, and interpretation facility, we can get there in the next five years, which is my personal goal.

In 1814, with the Capitol and the White House still smoldering, Baltimore came to successful defense of the nation, and out of Baltimore came intense pressure to reform government and expand the base of public participation. That cause was led by a few generally unsung heroes in the legislature, including the first serious student and historian of Maryland government, John V. L. McMahon, representing Allegany County, Thomas Kennedy representing Washington County, and Henry Marie Brackenridge, representing Baltimore City, allied with the Jewish community who had done much to finance the war and post-war reconstruction. They hammered away at injustice and in favor of a well-educated populace being able not only to vote, but to participate in public office. Only by examining the record, writing and speaking to the need, did they succeed, at least in part.

Let us be certain that as we move forward in the rescue of our economy and the improvement of our governmental system, that we do not neglect the care of the written, and now digital, record upon which its success is based.