Fragments of the Star Spangled Banner and the Figures in the Window? 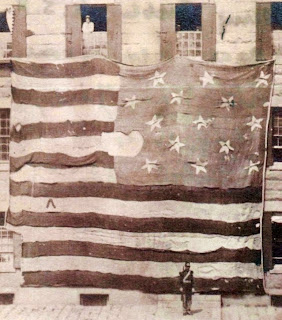 The other day, a neighbor and her brother kindly invited me to examine a family treasure.  It was a dark wood framed display of two photographs and two fragments, red and white,  snipped from the flag that flew over Ft. McHenry during the British bombardment of September 12-13, 1814. 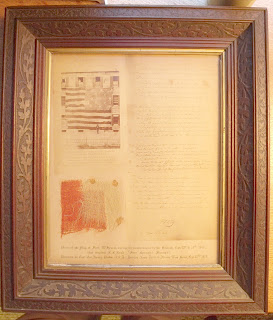 The fragments were taken from a gigantic flag, 30 by 42 feet, made by Mary Pickersgill of Baltimore whose house is now a museum devoted to its history. Recently the Smithsonian spent millions of dollars conserving the remains of the flag, which originally cost $405.90.


After overcoming the sticker shock of recent auction prices of similar, but less well documented pieces of the flag ($35-65,000), we settled down to unraveling the history of the framed fragments before us and of the two photographs that accompanied them.

The fragments were cut from the flag while it was in the care of Captain George Henry Preble, the first serious historian of the flags and pennants of the United States,and sent to Henry May Keim of Reading, Pennsylvania.  Captain Preble had the first known photographs taken of the flag.  A copy of one of his photographs was framed with the two fragments by Keim along with another photograph of a holograph copy of the song by Francis Scott Key that we know today as "The Star Spangled Banner," our national anthem since 1931.   Henry May Keim inherited the autograph manuscript from his father, a friend of Francis Scott Key, and subsequently gave it to the Pennsylvania Historical Society. Before that either he or Preble made photographic copies which they both retained to frame with fragments of the flag. 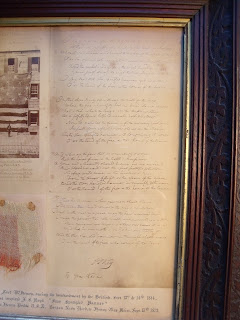 When Preble framed three other fragments for himself, he used the same photographs of the flag and Key's song as had Henry May Keim.

In all, before the flag finally came into public hands in ca.1912, more than 200 square feet of material had been cut away or lost.

But who are the people in the photographs?  Keim's copy is one of two known early photographs of the flag.  The best known has been dated June 21, 1873 and has two figures in the window with the guard below turned slightly to the left.

The Henry Keim's and Captain Preble's framed photographs have only one figure in the window and was probably taken within minutes of the other.  Perhaps the single figure in the Keim/Preble photograph is  the commander of Ft. McHenry, Major George Armistead's daughter,Georgiana Armistead Appleton, who lent the flag to Captain Preble, who in turn displayed it unfurled from the third floor of this Boston Navy Yard building?  Her 1860 photograph suggests that climbing to the third floor may have been too great a challenge.  Who is the marine? standing guard.  Might he be African American?  The flag remains embedded in our memories, as one of the great treasures of our Nation.  The figures in the window and on guard deserve to be remembered as well.

Note on Sources and Flag Conservation:

The best overall book on the history of the Fort McHenry flag is Lonn Taylor, Kathleen M. Kendrick, and Jeffrey L. Brodie, The Star-Spangled Banner. The Making of an American Icon, New York: Harper Collins, 2008. The best overall study of the song by Francis Scott Key inspired by the Fort McHenry Flag is P. W. Filby and Edward G. Howard, Star-Spangled Books, Baltimore: Maryland Historical Society, 1972.  See also George J. Svejda, History of the Star Spangled Banner from 1814 to the Present, Washington: National Park Service, 1969. Images other than those from Henry May Keim's framed fragments are excerpted from Lonn Taylor, et. al. The Star-Spangled Banner.  The Wikipedia article on the Star Spangled Banner Flag provides a good overview of the history and recent exhibits of the Ft. McHenry Flag including fragments.  It also provides an example of recent auction prices for fragments: http://en.wikipedia.org/wiki/Star_Spangled_Banner_Flag. The fragments continue to surface. When the American Antiquarian Society examined the contents of one of Captain Preble's pamphlet on the Ft. McHenry flag, they found fragments tucked inside. They were together in the shape of the Texas flag (sans star). Because they had been protected from the light these fragments are more vibrant than the Keim snippets, or those that were brought together in a 2008 Smithsonian exhibit. See: Robert M. Poole, Star Spangled Banner Back on Display, Smithsonian Magazine, November 2008 (http://www.smithsonianmag.com/history-archaeology/star-spangled-banner.html, accessed 2012/05/12)

How to preserve and conserve flags is an expensive proposition.  The Smithsonian spent $18 million dollars on conserving the Ft. McHenry flag, having to undo a well-intentioned (and patented) method that had been employed when the flag was given to it in 1912. As one web site notes: "When the Star Spangled Banner Flag was donated to the Smithsonian in 1912, it was already tattered and in very poor condition. The Institution began a restoration effort in 1914 by hiring Amelia Fowler, a well-known flag restorer and seamstress. She hired ten seamstresses who worked on the flag for eight weeks. First they removed a canvas backing that had been attached to the flag for the 1873 Boston Navy Yard photo. Then they attached a new linen backing with 1.7 million stitches to form a honeycomb mesh across the back of the flag. This mesh of stitches was intended to secure the fabric of the flag and prevent it from falling apart."

(http://www.revolutionary-war-and-beyond.com/star-spangled-banner-flag.html, accessed 2012/05/12).  Amelia was quite an entrepreneur.  She was employed by the U. S. Naval Academy and the State of Maryland to 'conserve' their battle flag collections.  At the Maryland State Archives we have large collection of Maryland's Battle flags that are a product of her work, and insufficient funds to reverse the damage her method inflicted on them.