As we approach the new year, the future of public archives and the connections between private and public memory may be more in peril than they have ever been since the burning of the Library at Alexandria in 48 BC.   Even with the library at Alexandria, however, there remains hope that what was once thought lost may actually be hidden in the vellum of monastery libraries tucked in the mountains and deserts of what today we call the 'middle east', and among the vellum treasures now resident at such prestigious libraries as the Walters in Baltimore.  Indeed we have our own vellum palimpsest which tells a tale of political intrigue by at least two of our signers of the Declaration of Independence, but that is another story for a later day.

If we do not continue to press for adequate care and storage of all forms of the public memory, from the paper to the electronic and allocate public funds to that purpose, much of what we know about ourselves and those who have preceded us since at least my birth cohort (1943), let alone those who will come after us, will be slipping away into oblivion.  Clay tablets and vellum are more durable than paper.  All three are more likely to survive the serendipity of historical accident, than the electronic world,  but in the case of all four, we must do a better job of preservation and access than we are currently.

Archives are all about connection and memory, tying the needs for improved public policy in a democracy to the individual memories of those who have passed through this world.  We do, of course, need to preserve the privacy needs of the present and protect all the records we preserve from the consequences of abuse and control so vividly written about in 1984.   But without the careful collection and preservation of the public and private memory, we would not be able to track and defeat the most virulent of genetic diseases, or help those so mentally ill that they become a terrifying destructive force in our society.

In the 1980s during my first decade as State Archivist, we assisted the efforts to track down and identify the disease that killed Woody Guthrie, a folk singer of great renown whose 100th birthday is being celebrated publicly through concert tributes around the nation.   To do so, it was necessary to piece together fragmentary data about people and places paying careful attention and respect to family privacy.  The results were significant.

For the past several years we have quietly been engaged in helping enforce gun registration laws, combing the fragmentary data of the permanent records in our charge within a 72 hour framework in order to provide a least a modicum of knowledge and control over who can get a gun.  I personally hope that that model is expanded and linked to pro-active mental health programs, but that is a matter of public policy that lies in the hands of the President, Congress, our Governor, and our legislature.  It is our role to provide and protect the data necessary for the implementation of public policy, ensuring that it is there and providing safeguards to prevent abuse.


As we move forward into the new year,  we need to keep our eye on our main responsibility as Archivists, lobbying for the space and resources to both care for the public and private record in proper archival storage conditions, and making that record accessible in comprehensive timed released ways that serve public policy and privacy requirements.

We have put forth an agenda for the proper care and preservation of the record.  We need to continue to add value to our understanding of the records, not only those under our direct care, but also those that reside elsewhere, making the connections, advocating sharing of resources, and ultimately making the public/private memory in our charge essential to the creation and implementation of both public policy and community oriented goals. 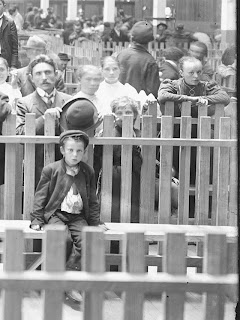 But one example of what drives us to make connections is this photograph of a young man about to enter the United States with his immigrant family.  We now know that the photograph was probably taken in June 1904 when the new arrivals disembarked from the "Neckar" a German ship built especially for the emigrant trade, at the new B&O immigrant pier, pier 9, the largest reception pier of its kind in the United States at that time.  The history of pier is integral to the history of Baltimore between 1903 and 1917 when it was thought that German sympathizers burned pier 9 to the waterline.


Those who passed through the terminal to life in the United States were not all destined for Baltimore.  In fact, most moved on to points west along the B&O.  In an effort to explain the photograph, we now realize that we have detailed names of every person who entered Pier 9, as well as more photographic evidence of those first emigres.  Indeed just recently the Baltimore Sun ran an article on a reunion of a family that in part came through Pier 9 in 1913, documenting how interested the descendants of those immigrants are in preserving the collective memory of those who came before them.  I suspect they do not know that we have a wealth of information in the Baltimore City Archives about the families that remained in the city, although another similar family held a large reunion in Baltimore that drew heavily on the resources at the City Archives to the point that their genealogy table filled a whole wall at their place of celebration.

Connections and memory are dependent upon how well we care for the often large and fragmented  bits of information scattered among the holdings of our public and non-profit private archives (such as the Maryland Historical Society).  It is only through the explanations and connections that archivists and our user community provide that the value of what we store and care for becomes generally known and supported through direct and indirect contributions.

While we need to do more with regard to our obligation to preserve and make accessible the public and private memory through providing adequate storage facilities and greater web access to content,  I can say with great  pride that the staff of the Maryland State Archives and the Baltimore City Archives, full time, part time, and volunteer, are a team without peer when it comes to helping people make connections and in accessing the resources we are struggling to preserve.  For that I, and those you serve, are especially grateful.   May your new year be as productive and fruitful as the last, and may we be successful in finding the resources to continue to properly care for the records entrusted to our care.

Today we have 20 children below the age of 7, and several adults to remember forever, not just for their families and for what they did and might have done, but also for the lessons the tragedy surrounding their deaths have for us with regard to what our public policies and preserving our public-private memories ought  to be.  Let us provide them and all the victims of such tragedies, wherever the violence may have occurred, a moment of silence and reflection, including in our thoughts a word of thanks for the blessings that have befallen each of us during this past year.

Thank you for this posting! While I am not absolutely new to ancestry research, I am new to research directed to Baltimore. Which really amazes me as I have lived in the area for 20 years! Still...I press on!

I have family that came June 24, 1914. I have a copy of the manifest. One person was sent back however and it is this person I am interested in at this time. I would like to find out where all of them were processed, any paperwork on that which would be specific to Baltimore, the paperwork showing this person rejected and anything as to when they left and on what ship.

I will give you specifics hoping you can direct me to the first place to look.

She had brought her 5 grandchildren ages 7 to 7 mos with her of which my grandmother was the eldest. The mother of the children came a year earlier to NY and assumed went to Chicago. I can only assume these children went onto Chicago. I know not how they were accepted without an adult to supervise. Perhaps someone was awaiting their arrival.

If you can direct me to where I go first to start to uncover the rest of the story I would be most thankful. Polish family in Chicago are trying to help with memories but they are either aging or already passed away. Thank you again.

Is it possible to reply to smboquist@gmail.com ????