"Where am I in all this?"- a comment for
LYING IN WAIT: Mining the Permanent Collection

The recent cooperative exhibit of the Maryland State Archives with the Maryland Historical Society, Maryland's National Treasures, resulted in an enthusiastic review by Joseph Ruzicka and an invitation to appear on a panel with distinguished curators from Yale, the Metropolitan Museum of Art, and the New York Historical Society to discuss LYING IN WAIT: Mining the Permanent Collection.

I had originally thought about talking about stories hidden within some of our documents such as the Annapolis Palimpsest, but a Facebook message from our son David changed my mind and led me to stress instead the importance of finding ways to keep the memories of past and current exhibits alive and educationally relevant.

David asked me if I knew about the Mining The Museum exhibit  by Fred Wilson at the Maryland Historical Society in 1992-1993.  I had heard about it but had not seen it, although I did remember that it generated a lot of interest.  I quickly discovered that the catalog of the exhibit was expensive to buy ($119), but that the Pratt Library had a circulating copy in its Fine Arts Department.

The book that resulted from the exhibit is in itself a work of art and provides a good overview of layout and design. The juxtaposition of white and slave societies was both engaging and pioneering for its day.  Of all the illustrations of the displays, I found the area devoted to modes of transportation most intriguing, in part because the Frank B. Mayer painting in the background  is owned by the State and has been restored at our expense for a place of honor in Government House, but it was the KKK hood in the baby carriage that really caught my attention.

The treasures in the exhibit are many and are introduced not only visually, but also by excellent essays including one that needs much wider distribution than it has had to date written by Ira Berlin. Indeed Lisa G. Corrin's essay on the significance of the exhibit (without illustrations) has been reprinted in Museum Studies, edited by Bettina Messias Carbonell (2004) and Reinventing the Museum edited by Gail Anderson (2004).

Both the images and the essays lead the interest and imagination to other stories and other places. Take for example the page from the diary of Governor Lowe's wife. Who would have guessed that her earliest memories were of Nat Turner's Rebellion (1831) and the fears of a slave revolt on Maryland's Eastern Shore. 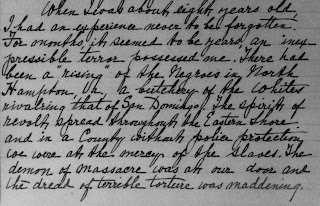 Yet perhaps the most poignant lesson from the copy borrowed from the Enoch Pratt Free Library was not the pages of the book, but the yellow POSTIT that was attached to a page in the middle which read simply "where am I in all this?" 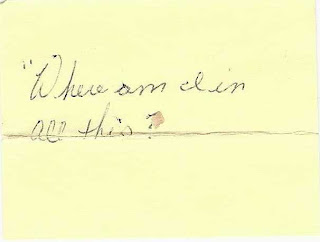 That is the question that we all ask, in one way or another, when we experience a well-designed and well-thought-out exhibit, and it became the central question for my part in the panel discussion.

Exhibits are consigned to ephemera and gradually fade away into obscurity unless the means can be found to replicate their magic virtually and incorporate them into an educational dynamic that not only reflects well on the institutions that installed them, but also brings the public back to visit.  You of course may be able to purchase the book  or hope you find it in a library in order to gain some insight into the content of the exhibit, but even the latter is not a sure thing.  Libraries are throwing out their copies.  The one I just bought for $119 was thrown out by a library at a State College in Washington State.  But even if the book is accessible, it is static with the limitations of the printed page and the book's design. With it you can never expect to capture the exhibit's spirit or its impact.

I was the only director of an institution on the panel and my remarks were consigned to last place. When I rose to speak, all the other panelists had abandoned the stage for the audience and I found myself feeling like the sole remaining violinist in Hayden's farewell symphony.   I had been preceded by very good presentations of current exhibits underway at each of the institutions represented, and I was inspired to visit each when they opened, but the original intent of the panel seemed to have been lost in the discussion of the objects.  Just what can be done to strengthen continued public awareness and presence at each new exhibit effort, and how can we do more with what we have cooperatively and for less?

The answer to me is to ensure that we create a virtual reality of the exhibits on line within the context of a permanent electronic archives and in such a way that the knowledge gained in the process of creating the exhibits remains to be mined and added to as further discoveries, attributions, and interpretations emerge over time. 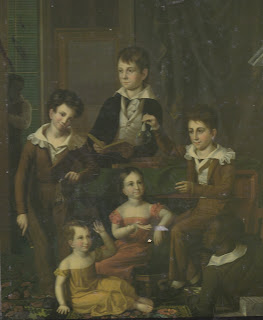 The lead portrait used on the cover of Mining the Museum of the Danel family, if properly hyperlinked to the background information on the provenance and the sitters in the virtual version of the exhibit, would lead to the whole world of privateering and the black and white experiences of sailors during the War of 1812, a hot topic among exhibit planners in Maryland these days. For example, a number of the sailors on Danel's privateers captured by the British, ended up in Dartmoor prison where a significant number of those incarcerated there were black sailors from the Chesapeake.

Mining the Museum was an enormously creative and provocative exhibit in its day, and would continue to have considerable impact on any who could  experience it virtually. Just by using some of the readily available techniques of recreating spaces on line and filling them with a moving, interactive virtual reality tour, as long as it were backed by a true electronic archives, would extend the life of an exhibit indefinitely.  One example is the convincing way in which the theater at Williamsburg has been re-created.  At any moment you would expect actors to appear on stage and they just might at some point if the techniques developed at this site are used to their fullest. 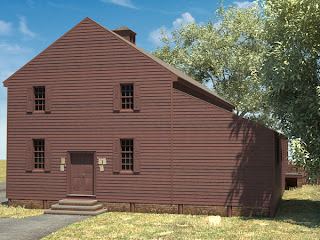 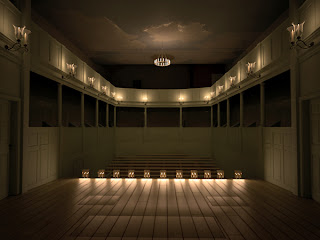 I don't mean  to suggest that the virtual world replace the tactile world, the up and close personal world of experiencing the objects in their 'real' museum setting.  In fact, once the exhibit is dismantled and the space is used for something else, the very fact of its presence on line will do much to encourage patrons to come in person and see what's next.

Does it add to the costs to create a virtual experience of the exhibit?  It need not if it is considered an integral part of the exhibit itself and budgeted accordingly.  Indeed the exhibit itself can be a mixture of the virtual and the real.  Think of the possibilities of giving the viewer the opportunity virtually to add value to and even re-arrange the exhibit on line to his or her satisfaction.

As the anonymous reader of the Pratt Library copy of Fred Wilson and Lisa Corrin's book literally noted, it is the role of any exhibit to at least prod the visitor to ask "where am I in all this?" and it is our role as curators and directors to ensure that the whole of the message remains for the enlightenment of all in a permanent virtual reality world.

How best to exhibit the Washington document (which is currently appraised at $1.6 million) and continue to make its importance known through the web is the task of our curators led by Elaine Bachmann, on a budget that is far less than anyone would have hoped, even in these dire economic times. Still we expect to have an interactive virtual reality tour of the exhibits in the Maryland State House on our web site by 2014, as well as the document in place complimented by the paintings illustrated in Joe Ruzicka's article. 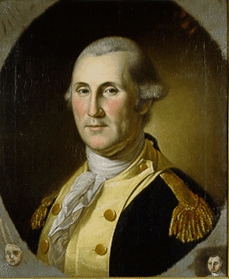 Recently I had the privilege of taking the first lady, her sister-in-law and their children on a tour of the State House and through the exhibit spaces which are undergoing renovation.  We brought the Washington document out of the vault to the Old Senate chamber for the visit, close to the actual spot where it was read to by the General to Congress assembled there.  It was clear that one of the questions in the minds of the children listening to me was "where am I in all this."   You would have to ask them how well it was answered, but in the end the President's niece asked me to shake hands with "Spirit", the stuffed unicorn she had been clutching throughout the tour.  It is our job to capture the spirit of those who experience an exhibit and to convert that experience into a never ending story for each succeeding generation to engage.  We must do so with imagination and a limited budget. In the process let's be sure we  find ways to hold on to the value of what we have created for the benefit of all those who come after us.