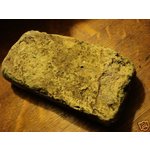 At 17th and 18th century archaeological sites around the Chesapeake Bay are to be found yellow bricks of Dutch and Swedish origin.

I was first introduced to yellow brick by Al Luckenbach and Julia King, two distinguished archaeologists.  Al was the first to thoroughly explore and expound the argument that even though there were navigation acts promulgated by the British prohibiting Swedish and Dutch trade in the Bay during the second half of the 17th Century, the trade flourished anyway. He had the Dutch tiles and bricks to prove it.  It turns out that even Jacob Leisler, the ill-fated rebel and resident of  the former Dutch colony, New Amsterdam,  may have owned land in Maryland, and, according to British rules, traded illegally in the Bay, although it is not clear that he sold yellow brick.

The Second Lord Baltimore, Cecil Calvert, (1605-1675) was under considerable pressure from the Board of Trade in London to enforce the Navigation Acts, and in 1673, his son and Governor, Charles Calvert, convened a court of Admiralty to condemn a Swedish ship, the Burgh of Stade, that had brought 50,000 Swedish [yellow] bricks to sell in Maryland. There is no record of the case in Maryland, and none has been found in England, but Professor Steve Murdoch found notarized copies of the court proceedings in the Archives of Sweden. Under the old calendar, which did not begin the New Year until March, the trial was convened on February 18, 1672/3, at Manahowick Neck on the Wicomico River, the boundary between Charles and St. Mary's counties, probably at the home of Thomas Notley, attorney for the Swedes, where the brick had been unloaded.  Notley's residence is shown on Augustine Herrman's 1676 map as Natly, on the St. Mary's county side of the river. 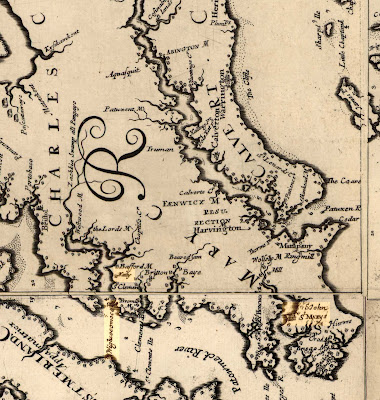 (Click on the map to see the details.  This excerpt is from the
Library of Congress's copy of Herrman's 1670 survey)

I inquired of Julie King what she thought of the 50,000 yellow bricks:

Professor Murdoch, with his co-authors Edward M. Furgol and Angelo Forte, first published their findings in a Swedish journal, Forum navale, Nr. 60, 2004, pp. 94-113, and have provided a revised version with transcript which is available on line, along with the images of the original documents taken by Professor Murdoch. 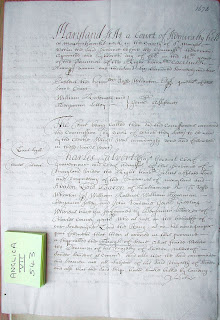 (First page of the notarized transcript in the Swedish Archives,
courtesy of Steve Murdoch)

The documents in Sweden provide an interesting puzzle for Maryland historians, especially those expert in admiralty law. The definitive work on courts of admiralty in colonial Maryland is  Courts of Admiralty in Colonial America, The Maryland Experience, 1634-1776, by David R. Owen and Michael C. Tolley. They include an appendix of every admiralty case they could find from the Maryland and British records that related to Maryland  (appendix A, pp. 237-337), but there is a curious gap between 1671 and 1676 into which the Burgh of Stadt case falls.


I have an untested theory that the gap was deliberate, and represents an effort by the Second Lord Baltimore to assert the admiralty powers of his charter in new courts of admiralty which were based upon the extensive admiralty jurisdiction of the Bishopric of Durham.  After Cecil's death in 1675, his son Charles hastened home to defend his charter, taking his admiralty jurisdiction proceedings with him (now lost) and the administration of admiralty law  reverted back to the Provincial Court, thereby abandoning his father's wish that there be a separate admiralty court .

Whatever the answer is for the period from 1672-1675 as far as admiralty cases are concerned, the navigation acts were enforced after 1690, and trade was carried out primarily on merchantmen such as this, with bricks being made largely locally and rarely the sole cargo.

(Click to enlarge; Cross section of a 17th century merchantman)

Owen and Tolley clearly demonstrate that the admiralty courts in Maryland and elsewhere in the colonies were the models used for conferring admiralty jurisdiction on the Federal Courts under Article III of the U.S. Constitution and Section 9 of the Judiciary act of 1789, and that continuity from what was developed as practice and decided in colonial times, proved the rule under the Constitution.  To supplement their book, they provided transcripts of the proceedings of the Maryland Admiralty Court, 1754-1775, which are on line at the Maryland State Archives web site.  Conflicts over sailors' wages, health benefits, payment for injuries to passengers, maritime liens and mortgages, marine salvage, ship building, ship's chandlery, are all documented in admiralty court proceedings.  Peter Graham Fish provides a good overview of the admiralty side of the Federal Courts after 1789 in his Federal Justice in the Mid-Atlantic South: United States Courts from Maryland to the Carolinas, 1789-1835 (Washington, DC: Administrative Office of the United States Courts, 2002), and the National Archives film of the Minutes of the Maryland district is available on line off the Maryland State Archives web site, but the surviving case papers remain in the possession of the U. S. Circuit Court  clerk in Baltimore.  They include the first known admiralty case in Maryland following the adoption of the Constitution involving the Brigantine Juliana.  The original filings in the case have been conserved for the Court by the Maryland State Archives with images on line at the Maryland State Archives in MSA SC 5463. The recorded version of the case as been reviewed by Michael Tolley who reports that "Twelve complaints, called libels in admiralty, were filed by seamen against the brig Juliana for unpaid wages in the US District Court for the District of Maryland.  I've seen the original minutes of this early case in the National Archives in Philadelphia, and the best cite that I have for it is: Minutes of the U.S. District Court for the District of Maryland, 1790-1911, April 17, 1790 (not paginated) (Available at the National Archives, Philadelphia, Pennsylvania)."

It is the role of the archivist to help researchers follow the yellow brick wherever it might lead, and to explain the value of the archival resources along the way.   The richness of admiralty court records in documenting the maritime world of Maryland remains largely unexplored, not unlike the material remains of the planters that sat in judgment of the Burgh of Stadt in 1673, and used its cargo of 50,000 bricks to build their homes in and around the Wicomico River between Charles and St. Mary's county.  It is a region rich in archaeological sites as yet unearthed with a 'swamp' at the head of the river that held the hunting lodge of Lord Baltimore and was once imagined as the site of a great canal.  There are limits to what archivists can do to help. Sadly the custodians of the first accurate mapping of that area by John Henry Alexander in the 1830s as the site of a canal, chose to sell his cartographically correct drawings to a map dealer, thereby removing them from public consultation and study unless purchased in facsimile or as originals by a generous benefactor. A much reduced and inaccurate version was published in 1835.  Sometimes the yellow brick leads to obstructions rather than a path forward.