Private Property and the American Dream

The ownership of private property is at the heart of the American Dream. From the very beginnings of the United States the right to own and defend private property has been asserted, cultivated, and enthroned in the constitutional and statutory laws of the country. It is also at the heart of the Great American Tragedy, slavery, which was ultimately embedded in Federal Law through the 1850 Fugitive Slave Act that firmly asserted slaves as protected personal property, and was only uprooted Constitutionally in December 1865 with the adoption of the 13th Amendment, after the national trauma of a bloody Civil War, the consequences of which still haunt us as a nation.

Recently the Boy Scouts of America, Baltimore Area Council, identified 19.014 acres in Harford County, Maryland, that had long been used for camping and hiking trails, but for which they could not establish title.  They successfully argued that the land was 'vacant', meaning that it was never granted to a private party under conditions of ownership that reach back to the founding of Maryland.  In doing so, the Boy Scouts of America, Baltimore Area Council, have upheld a tradition central to the American Dream and established their rightful possession of a tract of land, that, because of the failure of the person who first identified it to follow through in legally acquiring it, had lain overlooked and unowned for over 200 years. Any one of the surrounding landowners of that ‘vacant’ land who happened to have their own property surveyed over those years, simply assumed that what proved to be ‘vacant’ was owned by the successors in title to the person who first thought about claiming it. The question was never raised until the Boy Scouts and those assisting them began probing  their legal right to possess and use the land.  In the end, with the help of a professional surveyor and  a thorough searching of the land records, they made their case before the Commissioner of Land Patents at a hearing held on March 28, 2012.

Without question, the Boy Scouts are to be commended for the care and thoroughness with which they documented and argued their case.  It is to be hoped that they will take it upon themselves to also help document the history and the lives of those who held the neighboring properties as a part of the effort to enrich the stories of both the bright and the dark side of the evolving American Dream.

For example, Harford County had its share of slaves and free blacks in a state that legalized slavery until November 1864. In the 1814 raid of the British on Bush River during America’s second war for independence, four of Aquila Nelson’s slaves fled to the British frigate Menelaus on the promise of freedom, led the British back to wreck havoc on the property of Bush River residents, and helped take the schooner Fox as a prize. The four men possibly went on to join the British Marines, accompanying those who fought with the British at the Battle of North Point and the Battle of New Orleans. By the time of the Civil War, the county’s slave population had declined to about 1,800, while the free black population was about 3,644. There were at least 168 black men who claimed to have been born in Harford County who joined the United States Colored Troops during the American Civil War, fighting to extricate the concept of human beings as private property from the laws of the land. One such veteran was William Watson from nearby Dublin who joined the famed 54th Massachusetts. Another was a Lewis Stump, perhaps associated with the Stumps who lost property in the 1814 raid by the British. One of the neighbors to the vacant land was slave owner Eliza Chase Coale, the daughter of one of Maryland’s signers of the Declaration of Independence, a slave owner himself. It is known where Eliza is buried on her estate, Westwood, in Harford County, but not her slaves, although the slave quarters have been documented. Nor do we yet know much about those former slaves and free blacks who were Harford County natives who fought with the Union for their freedom, possibly including the slaves and their descendants claimed by Aquila Nelson, Eliza Coale and their descendants. 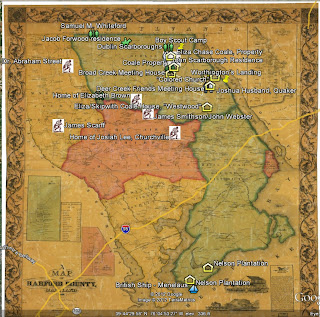 In researching the surrounding ownership of the vacant land, the Boy Scouts have brought themselves close to the heart of the Great American Tragedy, and have an opportunity now to help tell the stories of the lives of those affected by it, both black and white, thereby contributing to the necessary healing process so essential to the definition of the modern American character. I encourage them to do so, working with the Maryland State Archives as it continues to document the lives of all Marylanders, slave and free (see The Legacy of Slavery, http://mdslavery.net). The map above is but one example of how the fragmentary sources related to the lives of free and slave can be brought together on the ancient maps of the county through such free dynamic mapping resources as Google Earth. In this case the inter-active map can be accessed from the biographies of all those shown on the map.

As to 19 acres of vacant land identified by the Boy Scouts, the State Archivist is directly involved in determining ownership for two reasons. Apart from his legal and constitutional obligation to preserve and provide access to the permanent records of the State that document property ownership, the Archivist of Maryland is also the Commissioner of Land Patents. The Commissioner of Land Patents derives his responsibilities by Charter and statute from the original land grant to Cecil Calvert, second Lord Baltimore, to all of what is today, Maryland. He established the land grant policies that the State of Maryland took over in 1776. Original grants of land to private individuals were, and still are, called land patents. They are the starting point for all land titles in Maryland, followed by deeds, mortgages, and other means of title transfer that we document in http://mdlandrec.net. If any piece of property cannot be traced back to an original land grant (Patent), there is a possibility that there never was a land grant and that it is available for the giving by the State (at a price, of course, related to the current value of the land). The Commissioner of Land Patents is charged with determining whether the claim for the land is valid, and if so, recommends its granting to the applicant by the State, the final step of which is approval by the Board of Public Works and a land grant signed by the Governor. Any proceeds from the transfer of the land from State ownership to the Boy Scouts will be used, as provided for in law, to further the research and writing goals of the Maryland State Archives, including the employment of interns on the Legacy of Slavery (http://mdslavery.net) project.

One of the best introductions to the Fugitive Slave Act and its consequences is Don E. Fehrenbacher, The Dred Scott Case, Its Significance in American Law & Politics (New York: Oxford University Press, 1978). Chief Justice Taney in Ableman v. Booth, 1859, upheld the constitutionality of the Fugitive Slave Law. Ibid., p.453. For the ratification of the 13th Amendment see: http://en.wikipedia.org/wiki/Thirteenth_Amendment_to_the_United_States_Constitution. Maryland was the fourth to ratify in February 1865 during an unannounced and unheralded visit of President Lincoln. For the abolition of slavery in Maryland see: http://www.msa.md.gov/msa/speccol/sc2600/sc2685/html/conv1864.html. See also the biographies of Aquila Nelson MSA SC 5496-050755, Peter, George, Mark, and Primus, Eliza Chase Coale, http://www.msa.md.gov/msa/speccol/sc3500/sc3520/015800/015881/html/msa15881.html
Dr. Skipwith H. Coale, http://www.msa.md.gov/msa/speccol/sc3500/sc3520/015800/015882/html/msa15882.html
Posted by ecpclio at 8:40 PM