Annapolis, the Capital of the United States in Congress Assembled, 1783-1784: the Challenge, and the Last Word?


On Monday, November 26, 2012, it was my privilege to say a few opening remarks at an exhibit of documents and printed materials related to a formative period in American History, the extra-legal efforts of the thirteen British Colonies to separate themselves from British rule between 1774 and 1789, a cause not fully successful until the Treaty of Ghent in 1815, following the Second American War for Independence.


The occasion was the display of documents, printed material, and paintings largely owned by Stanley Klos, supplemented by loans from Seth Kaller, Michael Sullivan, and the organization, Forgotten Founders.

It is a fascinating exhibit, made even more remarkable by the extensive interpretive context provided by Stanley Klos and Mark Croatti, Director of the Annapolis Continental Congress Society, all of which can be found on the Society's web site: http://www.annapolisccs.org. The Society has been organized to promote the story of Annapolis as the capital of the United States from 1783-1784, and the whole history of the Continental Congresses, 1774-1789.

The exhibit is well worth studying carefully as it draws attention to a time when the British colonists south of British Canada took it upon themselves to re-define their relationship to the Crown and Parliament and ultimately to found a new nation out of whole cloth.  They did so by calling for an extra-legal convention of the thirteen colonies that emerged from spontaneous reactions all up and down the Eastern seaboard to the Coercive Acts of Parliament designed  to punish Boston for refusing to pay taxes on tea.  In Maryland, committees all over the colony, well documented by Charles Albro Barker in his Background of the Revolution in Maryland (New Haven: Yale University Press, 1940) and by Ronald Hoffman in A Spirit of Dissension (Baltimore: Johns Hopkins University Press, 1973), reacted strongly to the Boston Port Bill, one of the Coercive Acts, and called for a convention that met in Annapolis in July 1774.  This highly localized response across all the colonies is represented in this exhibit by a November 1774 printing of the Suffolk County Massachusetts resolves against the Coercive Acts, measures that the First Continental Congress would adopt in full by resolution on September 17, 1774:

Resolved unan[imously], That this assembly deeply feels the suffering of their countrymen in the Massachusetts-Bay, under the operation of the late unjust, cruel, and oppressive acts of the British Parliament--that they most thoroughly approve the wisdom and fortitude, with which opposition to these wicked ministerial measures has hitherto been conducted, and they earnestly recommend to their brethren, a perseverance in the same firm and temperate conduct as expressed in the resolutions determined upon, at a [late] meeting of the delegates for the county of Suffolk, on Tuesday, the 6th instant, trusting that the effect [s] of the united efforts of North America in their behalf, will carry such conviction to the British nation, of the unwise, unjust, and ruinous policy of the present administration, as quickly to introduce better men and wiser measures1


While I appreciate fully the importance of paying closer attention to the lessons of the Congresses held between 1774 and 1789, it would be remiss of me not to point out that the beginnings of concerted cooperative efforts among the colonies to formulate joint public policy and resist imperial rule from afar can be traced back to at least 1765, the Stamp Act Congress, and Daniel Dulany's pamphlet written and published in Annapolis:


When the First Annapolis Convention was in the making as a result of the Coercive Acts, Barker recounts (p.369) that "Daniel Dulany is said to have shaken his head, saying that he dreaded the consequences....,"
and consequences there were, ultimately leading to the subject of this exhibit entitled "America's Four Republics Exhibit."

There are many items presented here that will intrigue, educate, and enlighten those who view it, taking care to sort out the facts from interpretation.  There will continue to be those who see John Hanson as the First President of the United States in Congress Assembled and the role of George Washington in promoting our first trading expedition to China ought not, in my opinion, be a topic for debate.  There is no question that Congress authorized the departure of the Clipper Ship Empress of China on January 30, 1784, not George Washington, but our official trade representative, Samuel Shaw got his job with a resounding reference from Washington, and secured so much cargo, including some beautiful dishes intended for the retired Commander in Chief, that he had to charter a second vessel, the Pallas, captained by John O'Donnell of Baltimore where it arrived in 1785. O'Donnell  is better known today for his estate, Canton, which has lent its name to one of the more fashionable neighborhoods of Baltimore.

Apart from the Suffolk Resolves in this exhibit, I am particularly taken by a number of the items lent by Seth Kaller. The provenance of his Washington letter is the same as our holographic draft of Washington's resignation speech given on December 23, 1783, which soon will be on exhibit in the Maryland State House, thanks to the Friends of the Maryland State Archives. Washington threw down the gauntlet to Congress, charging them with caring for his army and stepping up to confront the many problems facing the new Republic.


Seth Kaller's  copy of the official proclamation of the announcing the ratification of the Treaty of Paris by Congress on January 14, 1784, is also as intriguing as it is instructive.  When embossed with the Great Seal of Congress and signed, Congress was then meeting in the Old Senate Chamber of the Maryland State House, a short distance from where the document was exhibited.  I wonder if anyone has compared the typography of the broadside to the type of the Maryland Gazette of the same week. Perhaps it  was printed on the same printing press as Daniel Dulany's Considerations in the print shop off of Charles Street?  Maryland still has its own copy, one of thirteen signed, embossed and delivered, although ours is not in very good shape because it hung on the walls of the State House for many years before it was laminated and retired to our vaults. You can read about it on the Maryland State Archives web site accessed from the following image. 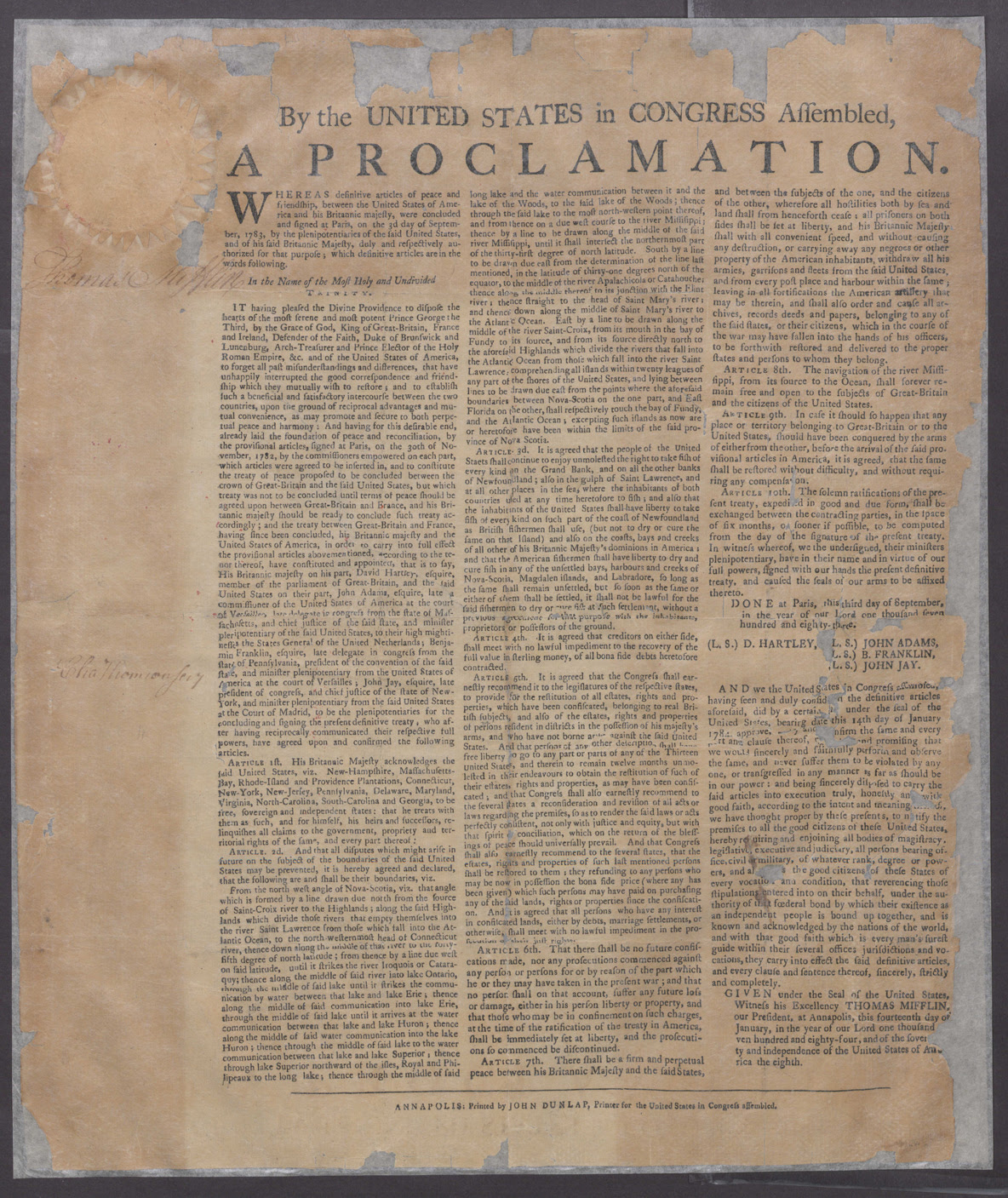 From my provincial perspective as State Archivist, I might quibble with the definition of Republic and argue that until the Articles of Confederation were ratified in 1781, it was all a matter of succeeding extra-legal conventions focused, after July 4, 1776,  on the prosecution of a war to end British rule led by George Washington, and that the Confederation itself, the first Republic,  found it powerless to stop the call for another convention in 1787 which in turn sought to form 'A More Perfect Union.' 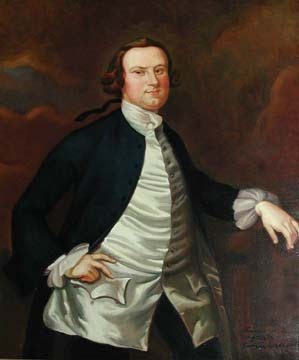 It was no accident that the Philadelphia Convention of 1787 chose September 17, 1787 as the day on which to ratify the Constitution.  John Adams, who was in England as our first minister to the Court of St. James, knew well the importance of September 17, as I suspect did most of the members of the Convention.  In his diary on the day that Congress adopted the Suffolk Resolves on September 17, 1774, Adams wrote:

"This was one of the happiest days of my life," noted John Adams in his Diary. "In Congress we had generous, noble sentiments, and manly eloquence. This day convinced me that America will support ... Massachusetts or perish with her." And to his wife he wrote: "These votes were passed in full Congress with perfect unanimity. The esteem, the affection, the admiration for the people of Boston and ... Massachusetts, which were expressed yesterday, and the fixed determination that they should be supported, were enough to melt a heart of stone. I saw the tears gush into the eyes of the old, grave, pacific Quakers of Pennsylvania." [quoted in the Journals of the Continental Congress, volume 1, 1904, p. 39, n. 1]

September 17, 1787 was also the last time that the Confederation Congress had any significant impact on the newly proposed government.  In his only speech to the Philadelphia Convention, Washington rose to suggest a change in the document to reflect an action already taken by Congress. Washington's remarks and Carroll's motion, led to the only erasure on the parchment ratified that day that changed the nature of representation in the House from one member of congress for every 40,000 people to one member for every 30,000.

As a strong proponent of a powerful, yet qualified, Federal government, Daniel Carroll of Maryland literally had the last word when it came to the Constitution and the views of the founding fathers as incorporated into the document as the first ten amendments.  When called upon to defend the Constitution as drafted in Philadelphia in 1787, he claimed not be a speaker of merit and chose rather to quote Benjamin Franklin on the necessity of improving upon the Articles of Confederation.  When elected to the First Federal Congress, however he took on the cause of amending the Constitution he helped write, sparring with Elbridge Gerry over the wording of the proposed 10th Amendment to the Constitution. It is to Carroll that belongs the honor of adding the words "or to the people" which to this day remains one of the least defined in law and in practice of all the amendments to the Constitution.  Carroll had the last word, but we have the obligation as this exhibit reminds us, of defining what those words mean.