Are the private messages a public figure writes of importance to our understanding of the past?  Should all correspondence, particularly emails, of public figures be subject to public scrutiny and permanent retention regardless of what server or storage device they may be on?  These are serious questions that will not be answered easily and are so politically charged at the moment, that resolution is not imminent.  Fifty-five years ago we were not confronted with the problems posed by public policy via email, and fairly reasonable guidelines for managing the paper files of government officials were in place,  although presidential tape recordings in the White House would prove a thorny issue to resolve some years later, consuming one presidency in the process.  Today Presidents probably fire off notes as instant messages from their phones or tablets, but apparently President Kennedy used small hand-written ones.

Not too long ago our son acquired a book containing a hand-written note that intrigued him and our grandson Everett.

It was from John  F. Kennedy to “President Freedman”  in which he sends the book, a biography of the Dowager Empress of China, along with the comment that the author “may have been a fraud, but he wrote a corking good story….good luck keeping the names straight…” and  points to the page to read first.   The handwriting  on the note resembles one of  President Kennedy’s secretaries, but the signature appears to be his (the Kennedy Library as a matter of policy declined to authenticate). 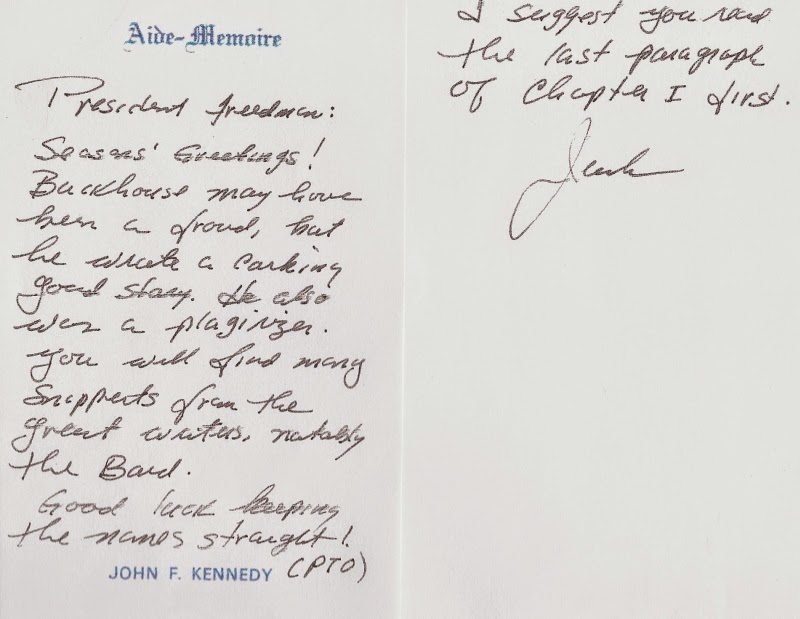 To whom was it addressed?  A reasonable guess is that it was a playful Hanukkah greeting  to Max Freedman (1915-1980), the Manitoban who was the Washington Correspondent of the Manchester Guardian and   Free Press, before and during the Kennedy Presidency, or to his brother Samuel, the Chancellor of the University of Manitoba.   Max Freedman was a friend with whom John Kennedy spent a number of evenings discussing their love of books on  a wide range of topics, but especially biography.  The Kennedy library has transcribed an oral history interview with Max Freedman which can be found on their web site, and, in response to an inquiry about the President’s relationship with Max Freedman,  alluded to the off-the-record dinners. According to Max Freedman:

…
Now, one of the things I used to do for him – I would break his tension – quite often I would get a telephone call from him, and he‟d ask me about a book. And as abruptly as he had phoned, he would sign off.  Sometimes he would talk to me for thirty seconds, sometimes for five or ten minutes. But I always knew that something had gone wrong, and he knew that if he got me on the phone that he could talk to me about books or the theater, and that would be it. It was helpful to him. I remember the last thing I ever did for him.  We were there one night, and we were talking about biographies, and he asked to give him some. So I sent him thirteen, and he returned twelve with comments on them
…
Max Freedman Interview, Kennedy Library, p 66-67

Is it genuine?  To whom is it written? Is it in a book from the personal library of JFK?  Ought it be preserved in a public archive somewhere?  Suggestions (and evidence) are welcome, especially to Everett who, along with his grandfather, believes it provides further insight into the intellectual interests of JFK, and, who also, of course,   is curious about its monetary worth.

At one of his  last news conferences on November 14, 1963, President Kennedy addressed relations with China:


…
QUESTION: Mr. President, what are the prerequisites or conditions for resumption of some sort of trade with Red China?
THE PRESIDENT: We are not planning on trade with Red China in view of the policy that Red China pursues. If the Red Chinese indicate a desire to live at peace with the United States, with other countries surrounding it, then quite obviously the United states would re-appraise its policies. We are not wedded to a policy of hostility to Red China. It seems to me Red China's policies are what create the tension between not only the United States and Red China but between Red China and India, between Red China and her immediate neighbors to the south, and even between Red China and other Communist countries.
…
Source: http://www.jfklibrary.org/Research/Research-Aids/Ready-Reference/Press-Conferences/News-Conference-64.aspx

The more things change, the more they remain the same, especially in the South China Sea. Perhaps if President Kennedy were in office today, he would call  on someone like Max Freedman and discuss the biography of the next to last of the Manchus to relieve the tension, even if he did not record the call for us to listen in.